Badger Growing Next Crop Of Referees 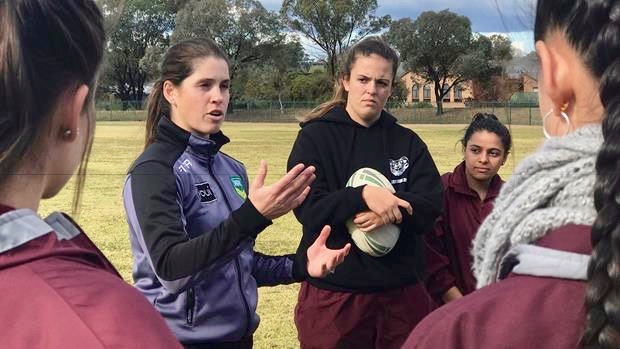 Rugby League is continuing to pave the way for females in sport whether that is on or off the field and leading NRL match official Kasey Badger is playing her part in the development of the game’s next best crop of referees.

Over 20 female students from Robert Townsend High School in Sydney’s South West attended an introduction to referee’s course on Tuesday that included a series of inside and outside components before they’ll be put to the test starting with Primary Schools Sports Association (PSSA) competitions in local primary schools across Sydney on Friday.

It was over a decade ago that Badger first used the whistle herself and is pleased to now be able to give back and more importantly, give women another avenue to explore while staying involved to the game.

“Hopefully the girls have got a new appreciation of the way we officiate on the field and about the game,” Badger told NRL.com.

“Robert Townsend High School has been a really strong rugby league school for a while now and have supported us in a lot of programs to referee in primary school football.

“A lot of the PSSA competitions wouldn’t survive without the support of high schools like Robert Townsend who let us have access to the students to referee the games.

“They’re going to now go out and referee PSSA games and we’re in discussions for them to take charge of games on the weekends in junior football through local associations.”

Regardless of the level of knowledge on rugby league, the feedback from the girls aged between 14-18 was well received and will benefit their long-term development should they wish to pursue a career in the future.

“For some of them they didn’t have a deeper understanding of the rules so it’s just about introducing that to them and then there are others who are pretty big fans with general knowledge, but we are showing them how many intricate laws there are,” Badger said.

“Refereeing isn’t just about knowing the laws but how to implement them so when we’re out on the field not only are we knowing what the tackle count is at or whether the side is back with us in defence, we know what to say and where to move – that’s the biggest learning process.

“It just comes down to confidence and knowing there is no reason why they cant be out there.”

Robert Townsend PE teacher Rob Child has been a strong supporter of the NRL programs and believed teaching high school students the skills to become a referee helps with their overall leadership and communication development away from the game.

“I’ve been doing this for the last four years with mainly boys at the school, however I offered it again this year to everyone and had a lot of girls put their hand up to get involved,” Child told NRL.com.

“I did it separate this year for the girls so they find it a bit less intimidating and get more detail and in depth about the rules.

“I like it because it gives the kids structure and some leadership roles that make them step up and break out of their shells when it comes to telling younger children to behave or instructing rules on the field.

“Obviously it comes down to family background for girls most of the time with brothers, because about 90 percent that have attended don’t play but are exposed to the game through other circumstances.”

After working with Badger over the years, Child has seen her development as an NRL match official and believes it is only a matter of time before she becomes the first female to officiate in the middle of a Telstra Premiership game.

“Kasey’s been my go-to person for a long time now and she’s great at coming out and running the course. I think it’s less intimidating for the girls having Kasey here and for the boys it works as well, she’s very well-respected by them,” Child said.

“The commitment she shows in front of the girls and from how I’ve seen her develop into someone who trains so intensely and gets paid to do that, it really struck a chord with some of the girls that they would like to follow down the same path.

“Some of the girls are looking to get into some work experience with the NRL development team and obviously refereeing is a part of their work so this type of course will help them reach their goal.”

Young schoolgirl Tamara has grown up around rugby league and will look to use the course and experience working with Badger to make the next step and referee local rugby league on the weekends.

“I’m the only girl growing up in a family of 16 so playing footy is something I’ve always really been around,” she said.

“It’s showed me more of the game from a referee’s perspective and Kasey has really taught me to be more affirmative with my voice and take control of the game with confidence.

“As a referee you second guess some of the calls but the more confident you are the more the kids will listen and play on.

“Already from today you’ve seen a lot of girls come out of their shell with the sport itself.” 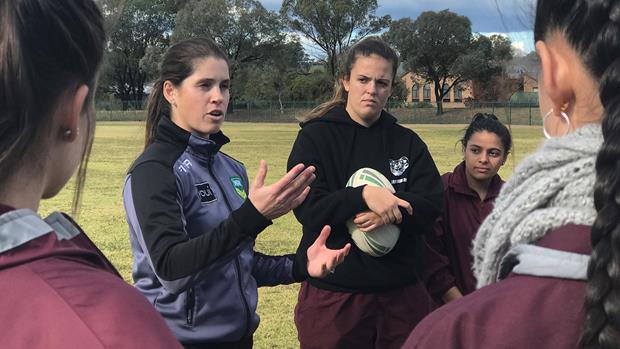