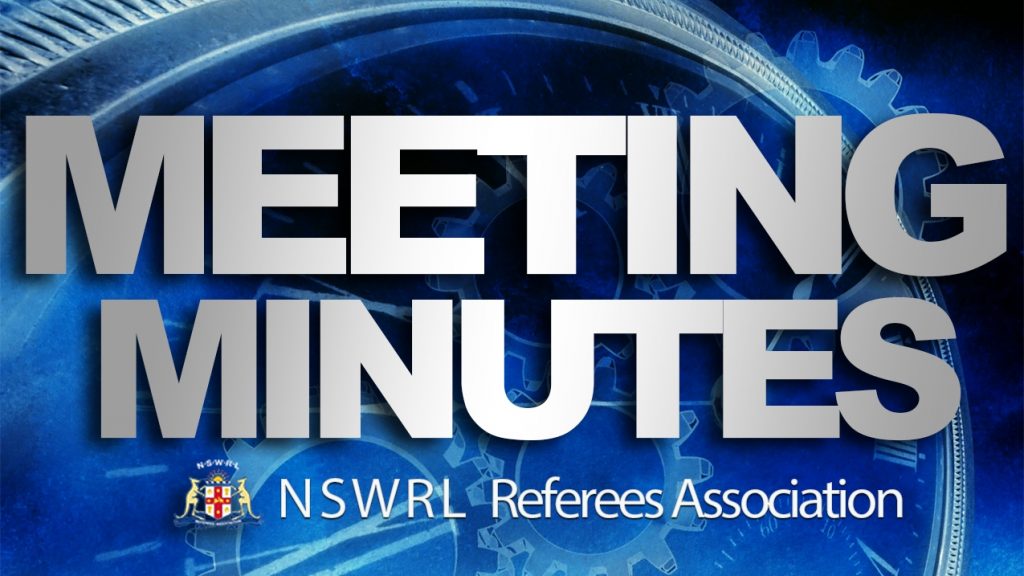 Present: As per Attendance Sheets (75 in attendance)

Chairman opened the meeting at 7.30 p.m, welcomed all present, and asked members to observe one minute silence in memory of the passing of The Newcastle/Coalfields NRAS Provider and long-serving member of that Association, Gerry Hinds and for Richard Johnston who contributed so much to Referee Development in Queensland especially but right across Australia through the ARLRA and other State and District Associations.

Gavin Badger announced the names of the referees appointed to the following Grand Finals :

Paul Simpkins presented all with their jerseys. Gavin Badger thanked the Association for its assistance throughout the Season.

1 . The Sydney Conferences Competition has replaced the Sydney City Competition. Some conflict over who will appoint referees for the Finals Series. Issue being taken up be The NSWRL.

2.Ron Coote has accepted the invitation to deliver the Laurie Bruyeres Recitation at the Life Members Luncheon on October the 7th, at the SCG..

3.The Association Web-site has been completely rebuilt and several other Social Media tools activated. This has largely been the work of Michael Jones. ( Full Report later in the Meeting)

4. No progress yet on providing a new Life Member’s blazer for our reluctant Ambassador, Brian Barry. I was informed by George Elias that Cedar’s Suits, Padstow has closed down and he recommended West Clothing, Shop 3/135 Polding Street, Fairfield Heights. ( Contact Phillip Pannucio PH 9757767 OR 0421 416 217).

5. Tim Robinson has tendered his resignation from the position of Director of Member Services; Director of Marketing and Communication. There is, therefore a Casual Vacancy on the Board which will be filled after due deliberation on the skills of the current membership of the Association and on the roles and the expertise required to successfully fill the position and meet the Board’s expectations.

6. The question posed by Jimmy Oliveira re the non-purchase of boots for the Graded Squad from the 2015 Budget has been followed up through Correspondence by Jimmy and the Board has fully discussed the issue at last Thursday’s Board meeting.. The current Director of Finance agreed to speak with Jimmy on the matter

8. Issue as to who will officiate the Eastern Suburbs Junior League competitions has been resolved between Easts and Souths Associations with Balmain Association to officiate.

9. Increases in MDA Fees mutually accepted by the NSWRL and the MDA’s .Compulsion for Sydney Shield Officials and MDA’s to attend Monday evening debriefs was dropped by BJ Mather.

10. Planning already under way for a NSWRLRA/NSWRL Conference to be held in November of this year. Attempts being made to ensure that it sets a new standard for such Conferences.

11. Assistant District Coaches initiative working reasonably well with some tweaking to be done by the Director of Referee Development.

12. Coaching and Development Grants made to four Districts only. Template to show what has been done in this area that warrants a Grant to be forwarded.. Reminder to all Districts that Administration Grants are available but must be applied for.

14. Steps being taken to ensure that all Active Members Annual Fees will be deducted in the June Pay Run.

15 Junior Representative Squad Presentation will be held on the 19th May in the Terrace Bar at Canterbury Leagues Club. Invitations to guests have been forwarded, 2016 Trophies collected and the Junior Reps are currently voting on the Michael Ryan medal to determine the referees’ Referee. Function in the hands of the Social Committee who have been delegated particular tasks to bring it together. Dress for the occasion will be Neat Casual. Thanks to Tim Robinson for his attempts to find a suitable venue closer to the city that was price competitive. Unfortunately, venues fitting this criteria are not available on a Friday evening.

18. No response as yet on the establishment of a hub in Canberra for Coaching and Training of Junior Reps and Graded squad members who reside there. Objective is to reduce travel and, if a success, extend possibly to Newcastle, Central Coast and Illawarra.

Board Minutes: Summaries from Meetings of the 6th April and the 27th April were made available to the meeting. No questions or comments were raised.

Items 1728-1765 tabled .. G. Jankowski called for the following Items to be read : 1735, 1737,1751.He made no comment nor asked any questions following the Readings by the Executive Officer. 1751 P.Kalina spoke critically on Dave Nissen’s response to reasons why Pay Slips contain no information re the Payment breakdown .He suggested to all members that they send e-mails to Dave Nissen requesting a breakdown of the Payroll Slip. Moved S.Watson, seconded S.Clapson. Carried. Items 1817-4817 tabled No discussion..

* Acceptance of Correspondence. Moved B.Gately and Seconded B.Barry that it be accepted. Carried * N.R.A.S * Research on Conditions of Appointment of Referees * CMO Level 1 Course * Junior Representative Squad * Referees’ Bowls Day As N.R.A.S Provider for the Illawarra ;N.R.A.S TOTAL of 22 new referees accredited.. Research on Appointments to Graded Games under the Control of the NSWRL. Using the Constitution of the NSWRL conducted research on referees eligible to be appointed to NSWRL Grade fixtures . Forwarded to Paul Simpkins and Matt Hewitt. Discussed at Board Meeting. Given the completion of the Ball and Matthews competitions and the return of Junior Representative Referees to their Districts together with changes to the structure of competitions coming in 2018, no action to be taken. CMO Level 1 Course … 29th April Organised by Willy Barnes, NRL RDO for Western NSW and assisted by myself. Difficulty in getting a venue. Tony Archer offered a room at the NRL. 15 candidates applied but with the short notice for application , date and venue provided, only 8 in attendance. T.Archer has advised that all future Education Courses will be conducted by the NRL. Finals of the S G Ball and Harold Matthews competitions to be played at Leichardt Oval on next. Saturday. Presentation Evening being organised by myself and Social Committee for Friday 19th May at Canterbury Leagues Club. Leichardt Bowling Club next Sunday. 9.30 a.m. Board has granted the Bowlers $1,000 as in previous two years.

* Conference Four Grants paid. Delegates urged to get their Treasurers to complete the Template that shows expenditure in the area over the 2016 Season. Doing quite well. Positive feedback received from District Associations. Regular meetings to be held with him. Working to improve upon the 2017 Conference with a date(s) to be set for late November or early in 2018.

* Grants A healthy Bank Balance with the first Invoice for 2017 to be paid within two weeks. Administration Grants to be applied for by Associations. Looking to pay out the Coaching and Development Grants as soon as possible.

* Stuart Raper * Invitation to Board Meetings * Gear for Graded Squad * Fees Issue Initial meetings have revealed that he is very accommodating. Representatives of any of the three Squads are welcome to apply to attend Board Meeting(s).Some issues have come back to the Board and Stuart Raper has addressed them. Nathan Loveday thanked for acquiring the gear. The Constitutions of the NSWRL and the NSWRLRA insist that all referees must have signed beside their names on a permission sheet to have fees deducted. A.Zapantis is following this up especially those members of the QRL and the CRLRA. The Constitutions cited above state that referees must be members of the NSWRLRA to officiate . Fees for referees from outside of NSW will be the same as for New Zealand referees. $100 for Centre referees and $25 for Touch Judges.

* Website built in 12 days and launched last week under budget

* All files/images/records transferred from league.net to new domain with ongoing support

* All other associations have been linked as before

* Engagement is increasing yet the platform takes time to build

– One touch and you are at the appointments page

– Instructions will be emailed when completed

– Benefits are no cost, easy to self-install, good for family to have

– Your choice whether to install or not

* Any other association that would like a similar one in their colours/theme it can be done at a competitive cost * Contact details – delayedreactionaus@gmail.com

1 Brian Barry thanked the Association for the gift of $1000 towards the Referees’ Bowls Day and congratulated the Junior Representative Squad Referees appointed to the H. M, TARSHA GALE and S G BALL Grand Finals .In a lengthy dissertation Brian pointed out that these referees now had their foot on the ladder reminding them that the NSWRLRA is their backbone. He gave an historical view of the manner of Grading referees in the 1950’s the reiterated that a Junior Representative Squad appointment was the first step towards a First Grade Grand Final. The anecdotes that Brian related in relation to his own career were greeted with applause.

2. G.Jankowski moved that the Board supply Graded members with footwear for 2017. Seconded by J.Oliveira who stated that funds were included in the 2016 Budget for boot purchase but they were not supplied. The motion drew no discussion and was Carried by five votes for to one again with 69 abstentions.

3 S.Watson spoke as the delegate for North Sydney asking when Grants would be paid. D.Gocher outlined the conditions required to be fulfilled for payment. S..Watson also lodged a complaint on behalf of the North Sydney Association on the failure of any of the NSWRLRA Board to attend their AGM. P.Simpkins pointed out that it clashed with a NSWLRLRA General meeting.