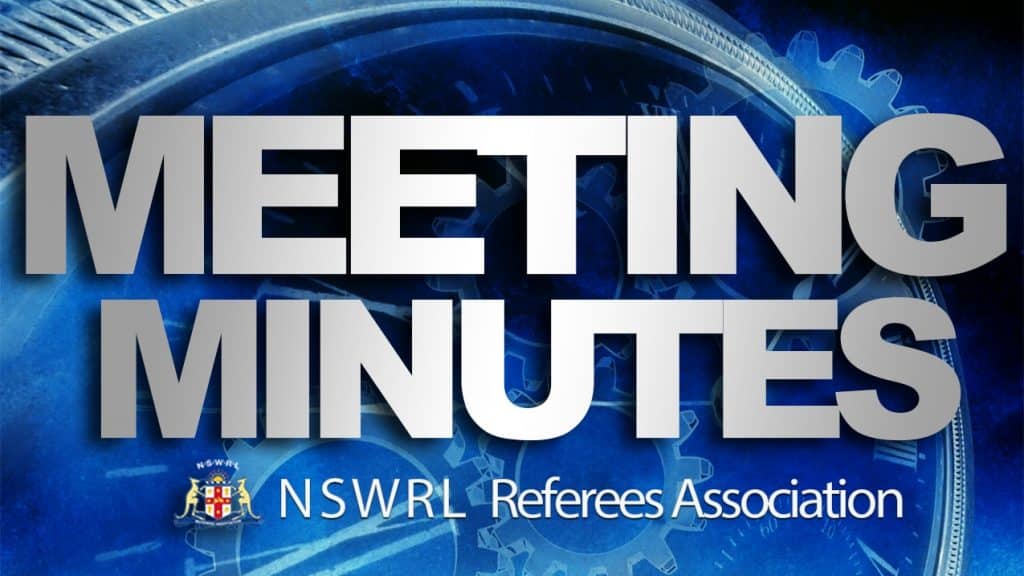 Minutes of General Meeting, 7th May 2012

Chris Ward in the Chair called for observance of one minutes silence in memory of Kathryn Oultram, wife of Drew Oultram from the Junior Representative Squad.

Congratulations extended by the Chairman to Shane and Danielle Charman on the birth of Harrison James.

Workplace Relations expert to advise the

Board and advocate for members. This

will address the long standing difficulty

for Active Referees to advocate for them-

selves .Details to be announced shortly.

The benefits of this more professional

approach will flow initially to the NRL

Squad but will benefit all Active members

who reach NRL level and can provide a

model to apply at the NSWRL level.

the NRL has resulted in the establishment

of more formal guidelines for referees to be

compensated for training or match related

between the NSWRL and NRL arrangements

are now close to resolution.

Services, Jon Stone, on the possibility of

obtaining direct discounts for members for

discussions have been encouraging with a

possibility of one such deal being announced

J.Stone has arranged for the issue of new

shoes to Active Members, Directors and

Coaches with D.Keen assisting in delivery of

discuss the possibility of attracting new

Cameron was very impressed with the quality and

ement of a new sponsorship during 2012..

Question raised by P. Parnaby of Balmain Association re search details for player/referees and was advised by J.Oliveira as to the process.

1226 from Correspondence Out. He chronologically worked through excerpts from these items

as they related to the perceptions created in the Chairman’s e-mail to selected members , in

the first instance, and to all members , after editing, of a second version of “ A View from the

services. Following assertions made by S.Betts the Chairman responded with his interpretation

of events. He apologised for the confusion the errors in punctuation caused and stated that he

was not casting aspersions. The CMO Course proceeded after intervention by Deputy

M.Dunn spoke re a question he had directed to C.Ward to which there was no response.

5. T.Danks stated that he was disturbed over comments in ‘A View from The Chair” forwarded to

selected members in March ,under the heading of “ What You Don’t Want”’ He was

particularly incensed by a reference to “cosy relationships”, and perceptions gained from

members the Chairman had spoken to. T.Danks addressed the issues of expenditure on

travel, entertainment and Presentation Evenings under his Chairmanship challenging the

S.Betts expressed grave concern re members perceptions not being checked prior to the

release of a statement by the Chairman.

L.Bugden asked where the perceptions were coming from to which the Chairman replied, “The

B.Ruttle asked if perceptions had come from referees who had left the Association who

consider themselves elite. G.Badger took exception to this comment and was supported by

D.Keen who stated that , if the comment referred to members of the NRL Squad , they do a

great deal of work for and on behalf of the Association outside their refereeing duties. S.Betts

6. B.Barry asked G.McCallum for the reasons for his resignation as Director of Referee

Development. G.McCallum asked the Executive Officer to read his letter of resignation and he

then spoke in support of it. The bottom line was that he could no longer work with Chairman,

M.Ryan spoke of the need to air conflicting views and that it was difficult to draw conclusions.

install C.Ward as Chairman and that he supported the objectives the Chairman had elected to

7. P.Kalina addressed five issues where he believed the Chairman had acted inappropriately as

Chairman  and/or had acted out of self-interest :- (i) Failed to follow the procedure for

despatch of Association Correspondence.(ii) Statements made in “A View from the Chair” (8th

2012 ( v) Attempting to have Sections of Board Meeting minutes deleted.

P.Kalina moved a motion of no confidence in the Chairman , seconded by M.Dunn. The

and that only a Special Resolution could remove a Director .S.Betts moved dissention from the

Chairman’s ruling. D.Spagarino supported this motion stating that if a motion is moved and

seconded, , regardless as to what it refers to , it has to be put to the meeting otherwise it is

pointless conducting a meeting. After consulting with the Executive Officer the Chairman

asked S.Betts if he would withdraw his motion of dissent and allow the motion

moved by P.Kalina to be debated. S.Betts agreed to this request and the motion was then

The motion was put to a secret ballot on a motion moved by D.Spagarino ,seconded by

B.Gately and carried. The result of the ballot was that the motion was carried . It was

moved by B.Barry, seconded P.Fitton that the ballot papers be destroyed. Carried.

Chairman. J.O’Sullivan and M.Dunn then offered the Chairman some advice as to the conduct

they believed the members expected from him in the future.

City v Country Fixture and to the Finals of the H.Matthews and S.G Ball competitions. This

was carried by acclamation.