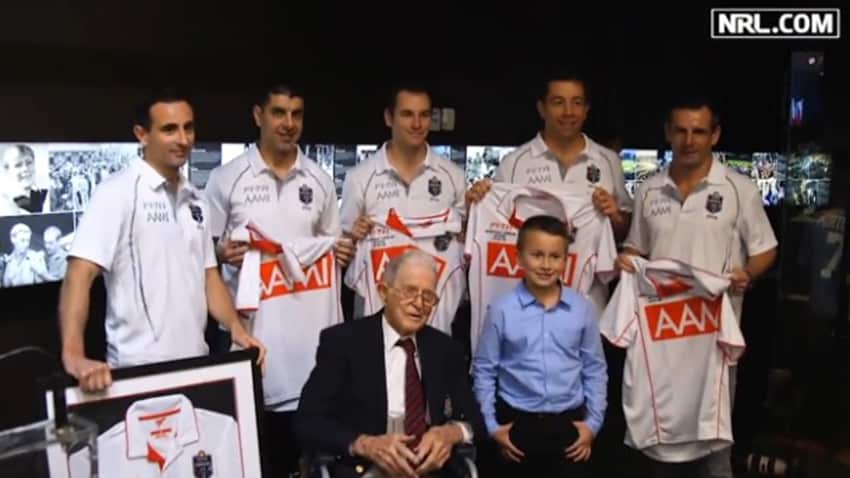 Rugby league has come together to celebrate the 100th birthday of former referee Robert Culkin.

Born during the First World War, Culkin moved to Sydney in 1944 from Wellington, in country NSW. He trialled with South Sydney but was persuaded by friends to take up refereeing instead.

It’s been 72 years since he first blew a whistle, but his impact on the game has not been lost.

Also in attendance were NRL CEO Todd Greenberg, NRL Head of Football Brian Canavan, NRL Referees boss Tony Archer, a number of officials from the current refereeing fraternity, as well as his granddaughter and great grandson.

Mr Greenberg described Culkin as a “true rugby league treasure” and recalled meeting him at the 70th anniversary of the All Schools Tournament in Penrith two years ago; 68 years after he refereed at the inaugural event.

“This game constantly celebrates milestones of players and officials, but I can tell you that celebrating this tomorrow, for you, 100 is an absolute first,” he said.

Speaking to NRL.com ahead of his special day, Mr Culkin explained why he decided to become a referee, as well as some of the special players and teams he’d witnessed over the years.

“I was very keen to stay in the game and I thought being a referee looked pretty good to me,” he said.

“The Sydney Cricket Ground remains the most special ground for me. As younger referees, we said that you weren’t a referee until you’d done a game at the SCG.

“One of my favourite players over the years was Mal Meninga because he’s big and strong. It’s very hard to pick the best team, but Souths always had a good side.”

Having seen the game evolve over the decades, Culkin said he would have done just done fine in the modern era without the assistance of technology.

When asked who the best official was during his time as a referee, Mr Culkin cheekily replied: “I’d have to back myself.”

It was fitting, then, that the game’s officiating elite were on hand to recognise everything he had done for rugby league.

After handing out the jerseys to the crew for Wednesday night’s State of Origin III, the man of the moment received some touching words from lead referee Gerard Sutton about his contribution to the game.

“In July, 1916, the Anzacs were preparing to go into action on the Western Front in WWI, and rugby league was a fledgling game trying to negotiate its first decade in Australia,” Sutton said.

“At that same time, Robert Culkin was born. One hundred years have passed since then, and for most of that century, Robert has lived and loved our game.

“It’s because of Robert and men like him that we have the opportunity to be professional referees in 2016.

“Refereeing at the elite level can sometimes be a bit of an isolating experience. There aren’t too many people who know what it’s like to be in that furnace.

“Having Robert here today reminds us that we’re just the latest in a long line of officials stretching back to 1908; officials who faced the same pressures, criticism and scrutiny as us, and who chose do the job anyway to the very best of their ability and with integrity.

“Robert and his colleagues dug the well that we drink from.

“If future generations of rugby league referees look back at us – the current guys – with even the smallest amount of respect and reverence that we hold for you, then we’ll be very happy.”