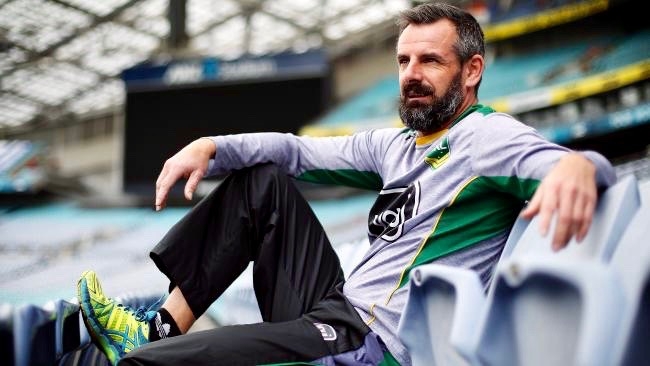 Great read with some fun humour to conclude!!

SO is Matt Cecchin or Cameron Smith the game’s best referee?

We put that question to Gavin Badger, who celebrates an impressive 300 NRL games at Pepper Stadium on Sunday.

“Funny question,’’ the Badge told us.

For all the weekly hammerings the poor whistleblowers get, the Badge gave us a wonderful insight into the life of a referee.

He loves the outdoors and getting away to the US with whistleblower wife Kasey to watch NFL games.

He was bowled over in his first game by Brisbane’s Carl Webb as he tried to improve his position when scoring a try at Suncorp Stadium.

“He put the big fend on me. Gorden Tallis was captain of the Broncos at the time and told me, ‘if you’re going to tackle Webby, you need to go low’,’’ Badger said.

What will come as a surprise to most fans is the amount of barbs that get exchanged among teammates.

“We’re in the attacking line where we haven’t been before, so you really hear it when the players give it to each other,” he said.

“The best thing you can hear is the honesty from the players, and if a player thinks his teammate isn’t pulling his weight, he’ll give it to him.

“They do it because they have such high expectations.’’

The biggest issue for referees right now, the Badge said, was pressure from video technology and social media.

He has lost count of the times he has tried to force himself to stay off social media when slagged over a call.

“We’re more accountable than the players when they make mistakes,’’ Badger said.

“If a player drops a ball over the line with nobody around him, the commentators and fans will almost laugh it off. But if we award a try like we did with the one at Brookvale Oval (a reference to Akuila Uate’s try), it was in the papers for days.’’