Wests Tigers and Eels players will wear special ‘Stay Kind’ jerseys for their Round 20 ANZ Stadium clash to honour an initiative to raise awareness and prevention of suicide in honour of the Kelly family, who tragically lost two sons –Thomas and Stuart – four years apart.

Then-18-year-old Thomas was the victim of coward-punch killer Kieran Loveridge in Kings Cross in 2012; Stuart took his own life one year ago, also at the age of 18, after not only losing his brother but having to deal with the fallout including being victimised over the State Government’s introduction of lockout laws in the wake of the initial tragedy.

Thomas and Stuart’s parents, Ralph and Kathy, have since launched the Thomas Kelly Youth Foundation and partnered with the two clubs and the NRL to celebrate Stay Kind day.

The initiative is about kindness and respect towards all people, and fostering a supportive environment in all aspects of life and community.

“We’ve got an enormous amount of respect for the Kelly family and the way they’ve handled themselves through such a difficult time is a huge credit to them,” Eels skipper Tim Mannah said at Monday’s launch.

“To have this Stay Kind initiative, it’s great we can get involved in it, two teams that can celebrate the day and really encourage people to understand it.

“The two clubs have a great rivalry and a great history. Whenever we play each other it’s always a good game so we’re hoping it’s a big turnout; one for the game, but two to get behind this initiative and really support it.”

The match – which will take place two days before the one-year anniversary of Stuart’s death – highlights the poignancy of the date for the Kelly family.

“The courage they’ve shown throughout everything that’s been thrown at them has been huge,” Manah continued.

“We’ve got a lot of respect for them and we’re really hoping the fans, even if you don’t support two teams can really come and support a great initiative.

“Playing professional sport can really bring the community together. When the rugby league community decides to support something they do a great job of getting behind it and I really hope they can do the same thing with this great initiative.”

Tigers back-rower Chris Lawrence said the issue of suicide was one particularly close for the Concord club, who experienced the tragedy of losing promising youngster Mosese Fotuiaka to suicide in 2013.

“It’s obviously a big problem in society, youth suicide, and to promote the message of staying kind and respect and kindness in all aspects of life is massive,” Lawrence said.

“I think this is why particularly the Wests Tigers wanted to jump on board, obviously we have a bit of a past with Mosese back in 2013 so not only within football clubs but society in general it’s a massive issue that needs more attention and if this is some small way we can shine a bit more light on it then that’s a small [contribution] on our behalf.”

Halfback Luke Brooks agreed the chance to be involved meant plenty to the club and the players.

“It did affect us a couple of years ago. It’s a great cause and I’m glad the Tigers and Parra as well are getting behind it and hopefully we can get a full stadium out there,” Brooks said.

For more information about Stay Kind go to www.staykind.org.au.

*Readers seeking support and information about suicide prevention can contact Lifeline on 13 11 14. 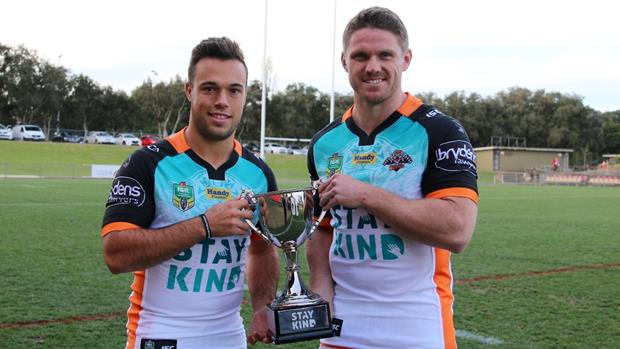