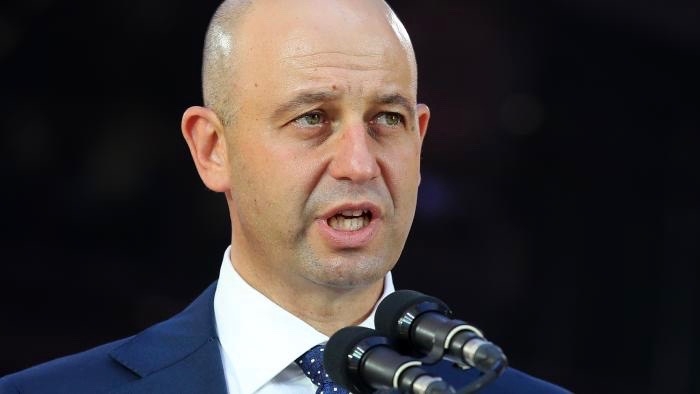 NRL boss Todd Greenberg has blasted coaches Trent Barrett and Shane Flanagan for their explosive press conferences, labelling it “ridiculous” to blame the referees for their sides’ losses in the two elimination finals.

Barrett and Flanagan gave extraordinary tirades after fellow losing coach Brad Arthur had also complained about several calls that went against the Eels against the Storm on a weekend marred by controversy.

The Manly and Cronulla coaches can both expect fines, with Greenberg confirming breach notices would be delivered “in the next 24 hours”.

While there were several 50/50 decisions that defined close results in all four games over the weekend, Greenberg said there was a “culture of blame in our game” that had a tendency to raise its head after teams had experienced close losses in big games.

Without clearing the officials completely of blame, Greenberg made it clear he would come down hard on any coach who unfairly paints them in a negative light.

“Unfortunately in this game we’ve developed a culture of blaming match officials for a loss,” Greenberg said.

In Manly’s defeat to the Panthers, Barrett was incensed by two match shaping calls in particular, with a Dylan Walker ‘try’ overturned by the bunker for a close offside call and Tyrone Peachey’s try to give his side the lead coming after the ball deflected forward off his body, and potentially touched his hand.

The following day Flanagan walked into his press conference with a piece of paper detailing a list of seven specific decisions he felt had incorrectly gone against the Sharks.

Greenberg did not address any of the incidents specifically but said by and large the officials had made the correct decisions.

“I’m not saying the referees are perfect. They never have been and they never will be,” he said.

“I’m not saying our referees got every call right. But I have reviewed the games and I can tell you the vast majority of the calls were spot on.

“The disputes we’re talking about were on really tight calls. Fifty/fifty calls.

Greenberg challenged coaches and clubs to look in the mirror and take some responsibility for the outcomes that affect them.

“The players make mistakes too and that’s what costs games, that’s why teams lose, it’s not the referees,” he said.

“And that culture has to change. We have to grow up, we have to take responsibility for our own outcomes.

“We had a great weekend of footy. Every game was a cliffhanger. And it’s disappointing that losing coaches feel that it’s OK to take away from that wonderful weekend of footy and attack match officials.

“We expect a lot more from people in such influential positions.

“Emotion and passion and the heartbreak of your season ending is not an excuse. The game really does need to grow up.”

Finally Greenberg put the spotlight on the referees and their boss, Tony Archer, telling them they were under pressure and needed to improve.

“The refs are far from perfect and they need to be better. Many of them will fight for a contract and their own livelihoods again next year,” he said.

“Everyone in the game is under pressure and the referees are no different.

“But to suggest that a team is not playing finals football this weekend is only due to refereeing errors is ridiculous and it needs to be called out.”